How the NHS spreads confusion, so nothing gets resolved

Yes Minister is alive and well 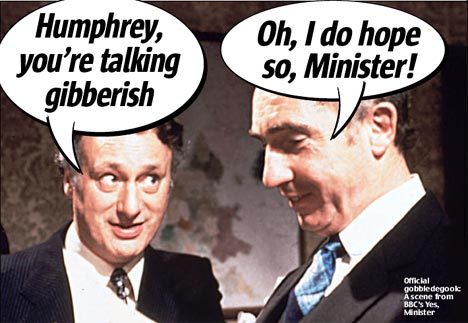 Whitehall loves confusing the voters.
Those who remember ‘Yes, Minister’ TV programmes will recall Sir Humphrey dancing around poor Jim Hacker, the Minister,  spreading confusion all around.  Having worked for Whitehall, I can assure you the programme was true to life.
Today
Stand by for more confusion.  However ‘they’ manage to fudge the figures, the NHS money pot is sadly depleted.  Recently Mrs. May announced there was going to be more funding, but ‘forgot’ to mention that this was found by massaging the figures – so in actuality there wasn’t going to be any increase.
What would big business do?

I have a lot of time for Roy Lilley, who writes the briliant NHSmanagers.net blog.  Recently, he asked this question – then went on to say  “It would appoint a well resourced delivery team, focus on three things and deliver them in a crisp, agreed timescale and move on to the next phase”.

So what does the NHS do?
It asks people, already up to their armpits in aggravation, pressures and targets, harassed by regulators and financial pressures, to deliver a hundred or more things in a web of conflicting timelines, all at once… and put up with the Minister of Health’s latest fads and brainwaves along the way.

If ever you have tried to get a sensible answer our of your local hospital Trust, this is why you are sent off at a tangent – because there are probably at least a dozen departments tasked with dealing with your problem, and no-one taking ownership.

There two golden rules of managing for results; simplicity and focus… but, when did the NHS ever do two things when it can confuse us all with two hundred?
Care Quality Commission  (cynics call this as the Careless Quality Commission)
The ‘great’ John Radcliffe hospital, flagship of Oxford University Hopitals, has just been downgraded by this organisation.  From GOOD last year, it has descended to a ‘MUST IMPROVE’ rating.
Ever since I arrived in the area I have had my suspicions.  But I am only a lowly patient, so convinced myself that it was me being new to the area, and I didn’t know how to access services that was at fault.
Earlier this year I ended up in A  & E.  Was lying on a trolley after being told “you haven’t broken anything – you can go home”,  But as I waited for hospital transport, a proscession of unknown doctors were coming up to me to say “we’ve had another look”, then telling me I’d fractured a new bone.  I was screaming to be sent home before every bone was broken!