How the NHS spends our money

Are we getting value for money with the NHS?

I often wondered why London’s  King’s College Hospital was more user-friendly than other London hospitals. How was it that Outpatients there could manage to see me without the usual long waits that were the norm in other hospitals?  And the calibre of Consultant and supporting staff seemed so much better and more efficient, and able to fit in more tests per visit than other places where I was treated?

Now I know why.  The hospital has over-spent its budget, and after a long-running dispute with the NHS watchdog over finances the much-respected Chairman, Lord Kerslake, has resigned. .

Kerslake claims that Ministers are in denial about the reality of how much extra money the NHS requires.

In the past I have been asked to serve on various NHS committees, and have been astonished that the NHS still has money available for ‘initiatives, at a time when staff still don’t know if their next pay rise depends on them giving-up time off  (that must be good for morale).  If I were asked to sit on a committee “to look into xxxxx ”  it meant that accountants were able to massage figures and produce funding to make the service under discussion viable.  I learnt that if you know how to massage figures you can find funding for many new projects in the NHS.
So if you need certain care, and are told funds aren’t available, look around and find out where the money IS being spent, and then use this info to create merry hell.  It’s up to you to play the system – and be assertive when asking.
The will to improve can be lacking – so you have to nurture it 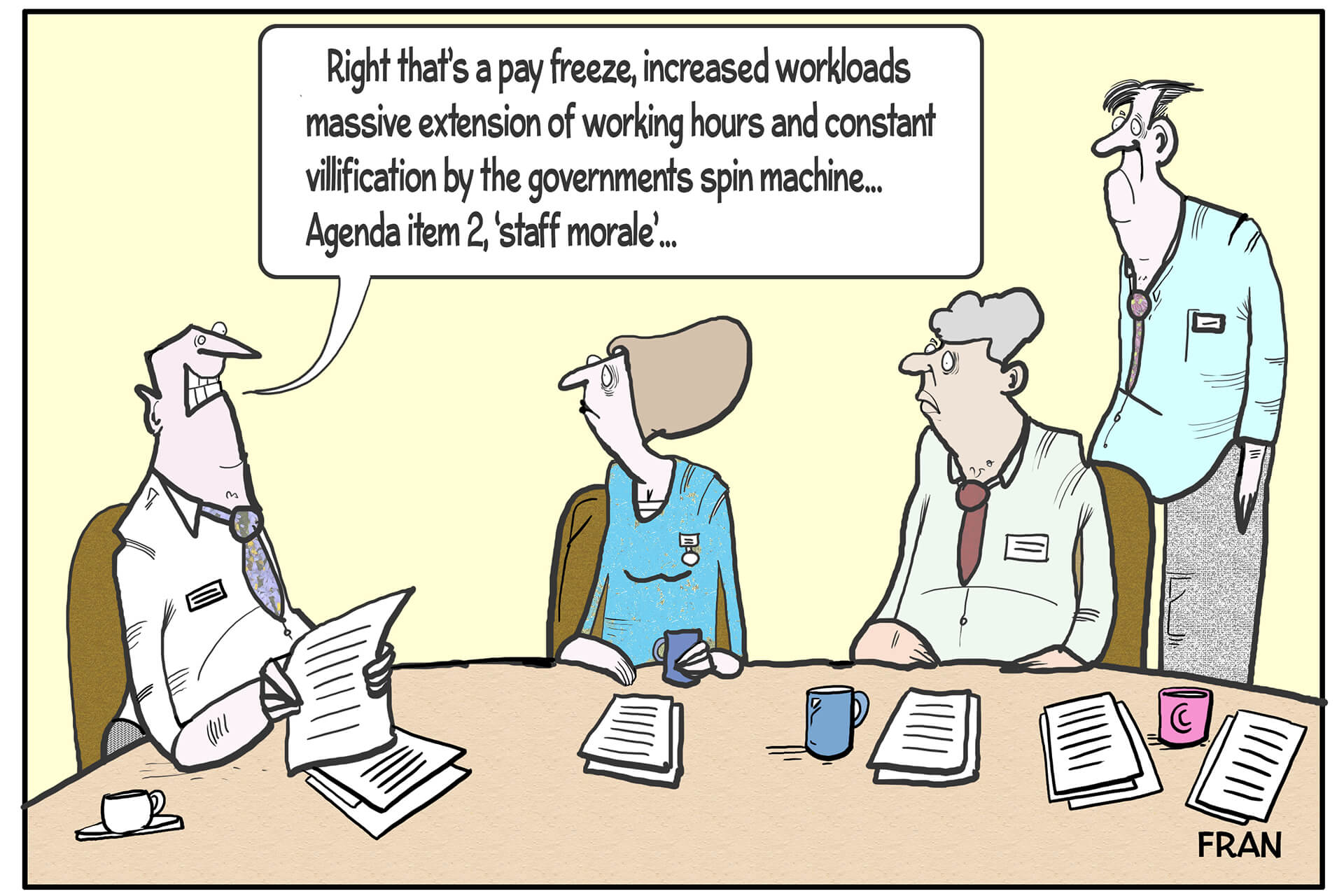 The National Health Service Cancer Plan was launched in 2000 in response to reports showing worse cancer survival in England compared to similar countries, as well as persistent socioeconomic inequalities for many forms of the disease.

In 2007, the plan was renewed through the Cancer Reform Strategy to consolidate the progress made (er – what progress?) and plans were set for the next 5 years.  But how many cancer patients realised this was happening?  And when big-wigs warned it was probably not going to deliver, did anyone protest at the waste of time and money?  Well – did you?  It’s not too late to ask your MP what is happening that might help you.  He/she probably will send back an anodyne letter  but get all your friends to write, and it will be surprising how quickly cancer gets put back on the local action plan!

Cancer services are constantly having funding cut, yet a national cancer initiative (NCSI) in England to improve survival from the disease found money to carry out a vast survey.  This survey’s finding have become the bane of my life;  when I need something, I can be told that it is ‘being looked into’, but no-one can tell me when we will actually get IT,  British researchers say this NCSI appears to have had little impact, despite major increases in investment.  All the money it cost, and years later the only ‘benefit’ seems is a fatuous Holistic Needs Assessment – that did nothing to improve my care.  But is fine if you happen to like ticking boxes.

Having just moved from London, where I was being treated at nine different NHS hospitals for long-term side effects, I am told my first appointment to ‘see a doctor’ to discuss cancer treatment is going to be in 4 (yes four) months time.  So I go privately to the Genesiscare Cancer Centre.  There I see an Oncologist privately, who gives me 75 minutes of a brilliant appointment that leaves me breathless, we have covered so much ground. OK, it was private, but worth EVERY penny, and shows we do have the expertise in Britain, but the NHS doesn’t offer this automatically – you have to ask and ask.

The aim of the NCSI was to improve cancer prevention, care delivery, and research through investment and reform, and funded by ‘a 35% adjusted annual growth in cancer spending between 2001 and 2004’.  It’s the word ‘adjusted’ that gives the game away, and shows that funding for this came at the expense of health care elsewhere. In other words budgets were shoved around, and someone lost out.  If you suspect it was you – make a fuss!

However, it now looks as if these initiatives had little impact on cancer outcomes.  So if you are a cancer survivor, it is up to you to be assertive and keep on and on asking for what you need.

More ways of wasting our money

NHSI (NHS Improvement) is to spend £500,000 with management consultants McKinsey, to (as David Williams, reported in the HSJ)… ‘clarify its purpose‘.   Started in 2008, this self-important quango doesn’t yet know what is its purpose, but apparently is responsible for overseeing foundation and NHS trusts.and ensure providers give patients ‘consistently safe, high quality, compassionate care within local health systems that are financially sustainable’.
In other words it’s there to ensure all the boxes are ticked, but is yet another layer of useless bureaucracy hospitals, and Lord Kerslake, could well do without. And according to HSJ (Health Service Journal) it doesn’t even know what is its purpose.  I can think of better ways of spending half a million, and am sure you can.
This expenditure adds to the £630,000 spent recently with KPMG, (another firm of management consultants on speed-dial at the Dept. Health) to work on its ‘culture and values and operating model‘. Er – what? And why?
Now, I served on a McKinsey-led working party looking at setting up a better patient-discharge system, to try and alleviate bed-blocking. The McKinsey team actually listened to the GPs and patients in the group, and came up with a very sensible plan.  So of course the Dept. Health rejected it.  But McKinsey are well-entrenched with Dept. Health, and obviously someone has come up with this spiffing idea to ‘improve delivery’ !!!
BMJ Comments

As this respected medical journal says: “To reduce the incidence and impact of cancer we must continue to be ambitious. The goals of the NHS Cancer Plan were to save lives and to ensure that the gains were evenly shared. These goals remain critical. The methods to achieve them need more work”.

Well, if they haven’t got it right after 18 (eighteen!) years, doesn’t that say something isn’t being done correctly?  Shouldn’t they stop wasting our money – or am I just too cynical?

So what can a patient do?

Looking at Polls, if questions are phrased right, you can get them to say almost anything.  But I do believe the one that  recently came up with report that 74% of those polled said they would pay more to get a better NHS.  My straw poll says the same – in fact I am getting fed up with having to pay privately for care I know I need urgently – but the NHS says I have to wait, sometimes months in pain.

Some reports say that Chancellor Philip Hammond is considering raising tax contributions to fund the NHS – but I don’t believe he has the guts.  We shall see.  In the meantime, it’s up to us to keep a beady eye on NHS expenditure, and jump up and down to ensure that vital services are properly funded.

So first rule:  if in pain, make a fuss.

2.  In same A & E, some bright spark had had the idea to banish pillows (to save money) I have scoliosis, so my head needs support.  This time I threatened to scream the place down and a junior doctor was despatched to the nearest ward for pillows. I scared them so much I was given an armful.   On my last visit they were back

You are entitled to basic comforts.

3.  ALWAYS check medicines.  Today’s Healthcare Assistants replacing trained nurses on the wards can’t be expected to know all the drugs, and over-worked junior doctors tend to write up a prescription for the most common drug, without checking if it agrees with your current medication. And many don’t know the properties of cancer drugs.

Always check what medicines you are prescribed.

4.  ‘Use’ your MP if not satisfied with your care.  Denied adequate Lymphoedema treatment I fired off letters to MP, MEP and everyone else I could copy in.  Within a month I got allocated £2,000 treatment in a private hospital – well worth the time and cost of half a dozen letters.

Get in touch with anyone you think might be able to help.

Get in touch with your MP

A petition about privatisation in the NHS has been granted permission for a Commons debate on 30 April. This debate will only be as good as the level of information which our MPs have available to them. That means TELLING your MP is you have concerns, particularly about falling standards which might be because your local hospital has contracted out certain services to a private company.

There are concerns that at the moment there is a limited focus on the privatisation of clinical contracts and a general acceptance from MPs in all parties that non-clinical contracts are not relevant to this debate.  Tell you MP if they are.

And even if you don’t think the debate on April 30th has any relevance, let your MP know what’s going on.  How can they know of your concerns if you don’t tell them?  Have a look at www.publicmatters.org.uk

The NHS is in a state of flux, and many staff have no idea what is going on.  It is up to us to take charge of our medical care;  if we leave it some over-worked junior, we have only ourselves to blame if we don’t get what we need.