Are you fed up with all the fuss but going nowhere?

All we seem to read in the press is ‘latest cancer drug’ – which turns out to be something being trialled, and won’t be developed for years.  Or calls to improve diagnosis rates – again no use; we’ve got it.
Interestingly, the British Medical Journal recently published an article stating  “The usual suspects (limited access to expensive new cancer drugs; delayed diagnosis and late presentation) may have less influence on cancer survival than is usually assumed”. 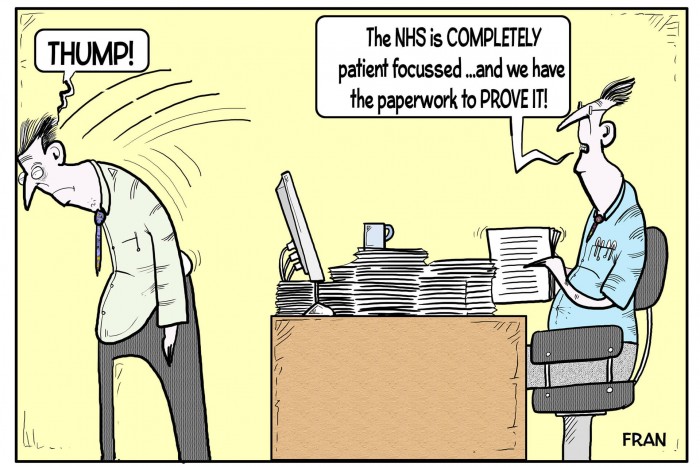 Often we know what is required to handle long-term side effects, but no-one seems to want to develop anything for us;  so often we have difficulties getting someone on any oncology team to take our symptoms seriously.
Feminine intuition usually knows what’s needed, and one of the best doctors in London says “I always listen to my female patients – they know when their body isn’t working properly.
He told me it often isn’t expensive treatment that helps, but medical staff who look at us as a whole person and FIX what is actually wrong. When I decided to do something about pain, it was stupid to suffer, eventually it turned out to be the simplest and cheapest remedies that helped me the most with pain.
Recovering from cancer, when a new condition popped up, he would send me to a top consultant for whatever was wrong. Yes, this was expensive. But I only have one life, want to live to a 100, so reckon I’m worth it!  So I went off to two top hospitals to consult their ‘pain experts’.
Warning!  I am not medically qualified, but do believe in consulting the best doctors. I don’t believe in ‘miracle foods’, alternative medicine, etc.  I go by clinical trials and what is used in major hospitals, particularly those in Europe, Australia and America, with better survival rates.
Pain
This is such a complex subject, and what works for me certainly might not work for others.  But hospitals are improving, and if you suffer pain, make sure you have been referred to a pain consultant for help and advice. Here is my guide to what worked for me.

I am definitely NOT going to preach and say you MUST try this – but these are some treatments prescribed for me by some of the top pain consultants in London; they worked for me.  Think about them, and if they make sense for you consult your doctors/nurses.

So STOP experimenting on me!  Give me what I know has worked before, unless there is a valid medical reason why I shouldn’t have it.

It was a sensible doctor who lectured me when I ended up under his care having fractured six bones (I don’t do things in a half-hearted way!).  He stood over me and explained that he didn’t want any heroics;  I MUST take the pain-killers at the times he prescribed – every four hours – even if I wasn’t experiencing pain at that time.

So I did – whether I felt I needed them or not.  And I was OFF pain-killers in double-quick time .  It’s when nurses are rushed off their feet and ‘forget’ to give you pain-killers at the right time that you don’t get the benefits, and often end up having to be on drugs a lot longer.

Cramp With polio, I was used to thinking about possible reasons for attacks, particularly cramp.  Eventually, after trying a multitude of tablets, I found that Quinine BIsulphate  worked for me (not Quinine Sulphate – it’s the BI that makes the difference for me).  There is NO guarantee they will work for you, so discuss them with your medical staff.

These tablets work for me – but may not work for everyone, and you have to have them on prescription (don’t buy them off internet sites as you don’t know what you are getting).

Electric under-blanket:  at the end of the day my joints are often throbbing, so I find lying in bed on a warm under-blanket incredibly soothing. Heat in all forms is helpful, especially the warm waters of a hydrotherapy pool.  So that works as well.

My electric blanket turns itself off automatically, so there is no danger of over-heating.  Incidentally, this is something family seem to love giving as a present, if you have a special event coming up!

An electric blanket has the double benefit of also heating the bed in winter; I find my joints don’t give me as much trouble in the summer, but heat, in any form, really seems to help. So if you end up at the end of the day with aching, throbbing joints, do try an electric blanket before resorting to pain killers!

I did try some machines, but frankly these didn’t work on me, neither did Acupuncture – but they have proved beneficial to some, so worth a try.

Also, lidnocain patches were superb at soothing bruises, but didn’t give my joints pain relief – but again many friends reported good things.  Each to his own.