When you need a break

Fabergé exhibition is a real tonic

Currently, there is an exhibition on at the Victoria and Albert Museum where you can lose yourself in fantasy land.  Gazing at exquisite objects saw me come out of it on a cloud; a visit was mood-enhancing and no pills needed

On until May 8th, the exhibition is devoted to the works of the Russian master goldsmith Peter Carl Fabergé, and is a massive pick-me-up, which I reckon should come on

prescription.  Immersing oneself in the privileged milieu of Fabergé’s customers took me back into another world;  very good for my state of mind.

As you enter, be warned that the lighting is very low;  if you have limited vision you might like to bring a magnifying glass with you.

Near the entrance is a video showing how enameling is done.  It is well worth watching, because it explains how many of the exhibits were made. Fabergé’s work often included enameling, and this film shows how it takes time and patience to fire again and again to get the depth of colour required.  Apparently the craftsmen could repeat the process 40 times before getting the colour they wanted.

First objects to catch my eye were two figures of the Imperial bodyguards. Commissioned by Emperor Nicholas II, these figurine portrait taken from life of the private bodyguards of the Empress and the Dowager Empress are on display –  sculptures on a level of rarity with the Imperial Easter eggs.

You then go on to cabinet after cabinet showing off the trifles that Edwardian society in Britain, and their counterparts in Russia, loved to give to each other as presents.  Fabergé was a master at marketing to this clientele;  he saw how they loved to take photographs of each other, which were displayed stuck up on mantelpieces gathering dust.  He had the idea of making attractive enamel frames to display these, and people flocked to buy them.

In society that tolerated Mistresses, as long as one was discrete, Fabergê made elegant little trifles that a man could present to his mistress, without offending the husband.  Yes, they usually contained diamonds and other jewels, but these were ‘chips’ rather than massive stones, and a husband could consider them worthless, without realising that the value lay in the craftsmanship, rather than the weight of the stones.

Fabergê took to modeling customers’ pets, and set his craftsmen to studying lumps of semi-precious stone to see how these might be adapted to show off an animal’s character.  King Edward VII loved these, and had his animals at Sandringham copied, plus his favourite dog, Ceasar.

One room has the largest collection of legendary Imperial Easter Eggs assembled in a generation, on display together as part of the exhibition’s dramatic finale, several of which are being shown in the UK for the first time.

aster Egg is my favourite; a tiny icy-white fantasy designed by Alma Pihl (left), one of the women working for the house.  Alma was the granddaughter of Fabergé’s head jeweler August Holmström]; others in her family also worked for Faberge and she started to work for him in 1909.  By 1913 she was good enough to take charge of designing one of the Imperial Easter Eggs, and produced the famous Winter Easter Egg. A year later she designed the Mosaic Easter Egg, which now belongs to The Queen and is also on show here.

Faberge employed over 500 people, including women;  the only criteria being you had to be a superb craft worker. Many of his staff were Finnish – he was said to prefer them to local Russians as the Russians would go out at lunchtime and have a drink which often meant their work fell off in the afternoon.  However, the Finns saved their drinking until the evening, so were able to work in the afternoon.

The Winter Egg is made of rock crystal, and resembles frost and ice crystals.  Studded with 1,660 diamonds, it is made from quartz, platinum, and orthoclase. The miniature surprise flower basket is studded with 1,378 diamonds and is made from platinum and gold, while the wood anemones are made of white quartz and the leaves are made of demantoid. The egg is 4 inches high.

As you go around the exhibition you will see many pieces that are familiar from photographs, but all much smaller than you can remember.  To show off the exquisite workmanship, photographers often enlarge the images so we can see better.  Hence the famous cigarette case given by Mrs. Keppel to Edward VII (on show here) is tiny, nothing like the double life-size it appears in many articles.   Don’t forget cigarettes were much shorter then.

By the same token, the Eggs on display often appear much bigger in print, especially if they have been given a full A4 size photo in a magazine.  So you may need your magnifying glass!

During the First World War Fabergé’s workshops turned over to providing materials to help the war effort.  There was a very austere egg, given to the Empress Alexandra in 1915, and in the exhibition it is shown opened up 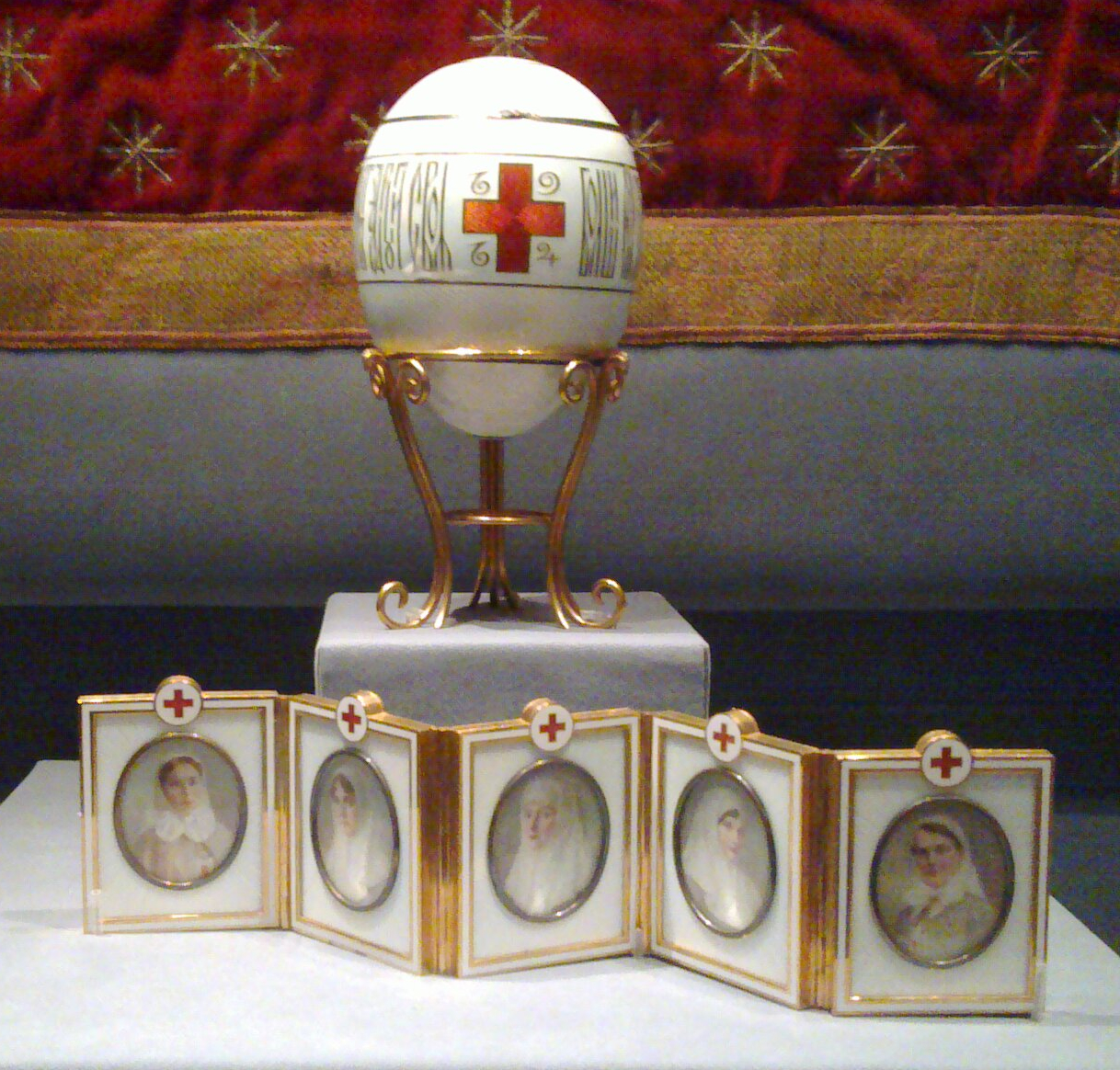 Empress Alexandra daughters Olga and Tatiana served as nurses, and the Faberge workrooms were turned over to making things like grenades (there is one on display) and syringes.  I do wonder if being injected with a Faberge needle makes it any less painful.

Who knows.  But I do know that the time one of his flower studies, (similar to one on display here), belonging to the Royal Worcester Regiment. turned up on the Antiques Roadshow, Fabergé expert Geoffrey Munn put a valuation on it of £1,000,000.  And that is just one object – the exhibition is full of these exquisite pieces.

I spent about 90 enchanted minutes in the exhibition and floated out to sit quietly in the outdoor cafe in the V & A’s courtyard, reflecting on this extraordinary exhibition.  There has been a smile on my face ever since as I remember what I saw, and it really was better than a tonic!

The V & A is very disabled-friendly.  Order a wheelchair online or by phone, and it is seamless with staff on hand to help.  A Carer to push your wheelchair gets in Free, there are plenty of Disabled toilets and easy access to the outdoor cafe (under canopy).

There is plenty of Disabled Parking in Exhibition Road, 20 yards from side entrance/exit.

You have to book a time slot online