The Queen sends a subtle message via her brooch.

The Queen often uses a favourite ‘trick’ to send a subtle message;  Her Majesty has an incredible collection of jewellery, and she will pick a certain piece to underline her message when she delivers a speech or makes a visit.

For her VE Day Commemoration broadcast to the Nation, she used a pair of diamond and aquamarine clips, an 18th birthday present from her father, King George VI, to underline her message. 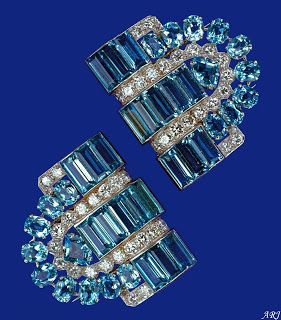 It is rare for the Queen to give a national televised address, so giving two so close together underlines times we are living through.

For the latest, Buckingham Palace chose 9pm for her World War II commemorative broadcast – the same time her father delivered a national address, on the radio, 75 years ago when the war in Europe came to an end on May 8th  1945.

The brooches she chose to wear were favourite pieces of personal jewellery, a Boucheron aquamarine and diamond brooch given to her when she was Princess Elizabeth by her father, King George VI, for her 18th birthday, which had come the year before VE Day.

As was popular in those days, the brooch could be divided in two – often worn either side of a neckline.  Sometimes Her Majesty wears it in its massive entirety, but usually she splits it into two, as she did this time.

Regarding where they were made is another matter. Noted expert Beatriz Chadour-Sampson says “during the War there were workshops in London making pieces for Boucheron – maybe the stones were re-used family heirlooms – just a thought – as it would have been difficult to source diamonds . The aquamarine became fashionable  in the 1930s and 1940s – as a replacement of expensive sapphires, rubies and emeralds”.

Legend has it that Aquamarines are mermaid treasure, suitable for the daughter of a naval officer (The King served in the Royal Navy when young), as they were used by sailors as a talisman of good luck, fearlessness and protection.

The name Aquamarine comes from the Latin aqua marinus, meaning “water of the sea,” and refers to its sparkling ocean-like colour. The pale blue, transparent crystal is a member of the Beryl family; its colour caused by iron

In case you missed it, in Her Majesty’s previous broadcast she also used another gemstone to highlight her message;  this time it was a Turquoise, centre stone in one of her massive brooches. 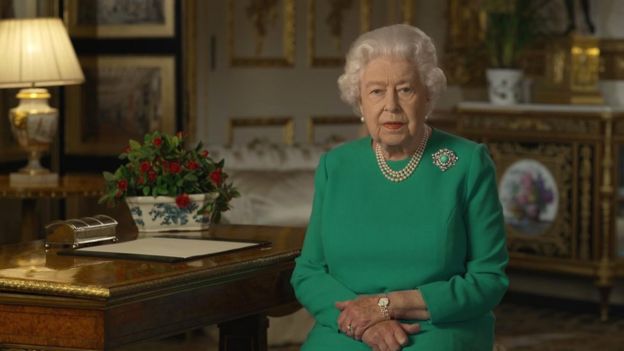 This was a brooch left to her by her Grandmother, Queen Mary, that emphasised

the theme of her speech; Turquoise stands for health and protection, and Her Majesty used this magnificent diamond and turquoise brooch to cleverly echo her theme of hope for the future. It was part of a set given the young Princess May of Teck when she married the Prince of Wales, in 1883, and left to The Queen by Queen Mary, her Grandmother.

Turquoise means Turkish stone, and is one of the oldest gems known to us. Originally mined in Persia (Iran), traders would purchase these gems from dealers in Turkey, for sale in Britain, France and the rest of Europe, hence the name turquoise, because the trade routes that brought Turquoise to Europe from the mines in central Asia went through Turkey.  Today you often see babies in this part of the world wearing a turquoise pinned to their clothes for protection.

Speaking to Beatriz Chadour-Sampson , jewellery historian and Museum Curator, about this jewel, she said she “also noticed the Queen was wearing a green dress – the colour of hope”.  Appropriately, it is said that Turquoise is helpful to the respiratory system and aids in healing lung disorders and allergies.

Read: This book would be a lovely one to read whilst self-isolating – The Power of Love.  Beatriz Chadour-Sampson has used her vast knowledge to produce the story of jewelry and love – especially engagement jewelry.