Nobody warned me about Lymphoedema

When my legs swelled to the size of a rugby player’s, I became 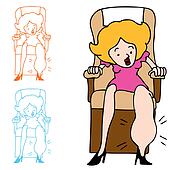 No-one  told me that my cancer op might bring this on, but vague comments made me realise I had Lymphoedema.  Later I found out that 40% of breast cancer survivors suffer, as we often have lymph nodes (which act as drains) removed during the op.

I read just everything I could about Lymphoedema and how to treat it. Then waited – and waited – for a specialist appointment at my cancer hospital.  When I finally saw a specialist, he set me on a pathway to ‘deal’ with this, without much hope of a cure.

Luckily, I contacted The Lymphoedema Support Network (LSN) where Anita Wallace and her team were invaluable, and gave me reassurance, particularly when I was trying to find a cure, but meeting indifference. Whenever I came up against a brick wall, they were there with help and advice.

Numerous visits to NHS Lymphoedema clinics, where they tried to fit me with compression garments which didn’t work, had me in despair.  I even contemplated taking a Stanley knife and plunging it into my swollen limbs, to try and let out the fluid that was building up, causing pain and stretching my skin so all I could do was scratch.

NHS treatment prescribes compression garments;  thick, hot elasticated sleeves or socks.  With few muscles in my arms, (because of polio) I just couldn’t pull them on.  I would go to a clinic, they would prescribe socks and take numerous measurements, which were sent off to manufacturers.  Eventually, the socks would arrive through the post.

I would try and try to pull them on, but couldn’t manage this.  One day I went off to the clinic to show staff the difficulty I had, and a kind nurse told me she would put them on for me.  Success!  Until I came to take them off that night, and discovered what was up – stayed up.  And was just as difficult to take down.

I solved the problem by using a bread knife to hack them off.  But this left £80 worth of once-worn garments shriveled up and lying in the waste-paper-basket.

I knew I was not alone: Lymphoedema seems almost forgotten, and there are thousands in the same boat.

Life went on – I had deep thoughts about Stanley knives and what I could do with them, until one day I met a Hungarian Lymphoedema nurse.  “Of course socks or hose won’t work for you;  you’ve had polio”, she pointed out, “and won’t be able to pull them on”. She went on to explain that instead I should ask to have Manual Lymphatic Drainage (MLD).

I am NOT medically qualified

I have had NO medical training whatsoever;  my only qualification is as a patient, but I thought MLD sounded a good idea – and what had I to lose?

As my job involved traveling around Europe, where MLD is common practice, I had no problems getting this massage, particularly as whenever I went to a European clinic for other cancer treatment, they would take one look at me and included MLD in my treatment regime.

Returning to the UK, it was just my luck that the NHS was no longer offering MLD.  Only solution was to have this done privately, and LSN recommended Sossi Yerissian.

Under her careful hands-on care my ankles, elbows and even facial bones started to re-appear, and I no longer had thoughts of puncturing my swollen skin with sharp  knives.  Each time I went for a massage, Sossi would put one limb into a Haddenham inflatable sleeve that she had in her treatment room, massage the other limb, then swop over

Sossi works in London, but if you live outside ask the LSN to recommend someone in your area;  when I moved to Oxfordshire, they recommended Sarah Bellhouse, who took over with MLD, and now my ankles and elbows are no longer hidden away.

Cost in Oxfordshire is about £45 a session.

At the same time, I was lucky enough to be recommended for a medicines review at the Royal Brompton .Hospital.  There, Dr. Alexander Lyon went through my pills, and eventually suggested two diuretics.  Now, most doctors look at the list and immediately take me off one, but the two work in tandem, and helped to reduce swelling.

When I moved to Oxford, I still had some swelling, although nothing like before.  The Lymphoedema Clinic at the John Radcliffe was running trials on different types of inflatable sleeves, and asked if I would like to be involved!

These sleeves are compression machines that work like a pump for the blood circulation in the body, helping improve the blood flow. After all, the swelling we get is body fluids piling up in one area as they can’t be pumped through our system.

The rhythmic pumping movement of the machine allows the excess lymph fluid that is collected in one place, to be moved in a natural way and become part of the circulatory system again.  The sleeve construction is simple. very easy to clean between treatments, and each person has their own pair of lining socks.

There I was back on the familiar Haddenham machine, which had enough time to really get to grips with my problem, as the sessions were about an hour long.  Its results were so good that I am almost completely cured.  I still have a slight amount of swelling in hot weather, so, with another Lymphoedema friend,  am buying a Haddenham sleeve to use when swelling happens.

However, it is important to ask your doctor or lymph nurse about the right technique otherwise blood clots can be affected adversely. The wrong method takes the lymph liquid and can force it into the surrounding liquids if not done properly.  So you need to ensure you have the appropriate machine.

You learn something every day

This video has sensible advice from Anita Wallace and Denise Hardy – stalwarts of LSN – and I learned from it. Particularly worth looking at if you need an infusion or an op.  https://healthunlocked.com/lsn/posts/146863939/lllt-day-21?utm_campaign=lsn&utm_medium=email&utm_source=notification&utm_term=daily+digest

Lymphoedema certainly is a ‘Cinderella’ condition as far as the NHS is concerned, and I believe that in some areas you even have to pay for compression sleeves or socks yourself.

I had to pay for MLD in Britain, although if I lived in Europe I would get it as part of most health services.  In the UK I paid between £45 – £80 per session, depending on where I was living.

But the NHS did pay for the diuretic pills!

‘Curing’ it is a long and costly process;  although some people are now paying for an operation on the lymph glands which costs several thousands.  I consider myself lucky;  I paid for MLD myself, and will be paying for a sleeve, but it was worth it to me to be pain-free.

What happened to me might be a one-off.  There is no guarantee what worked for me might work for anyone else.  However, I menntioned my success to my Ocologist, and she nodded and I gathered that others had had success – BUT – nor everyone.

My advice would be to talk to LSN first, especially as they often have lectures etc. highlighting the latest techniques, operations pros and cons, etc.  Then try the different treatments mentioned above, and hopefully you will be as successful as I was.