We’re excited when told we have fnished treatment.  Some even get to ring a bell.  What we can never imagine is having to deal with numeous problems caused by long term side effects from treatment;.  Some are niggles – others major problems from heart conditions to osteoporosis, and can crop up  years after you thought you had finished ‘all that’.

Dealing with side effects, you can find you are on your own. You’ve been Discharged ‘back into the community”, 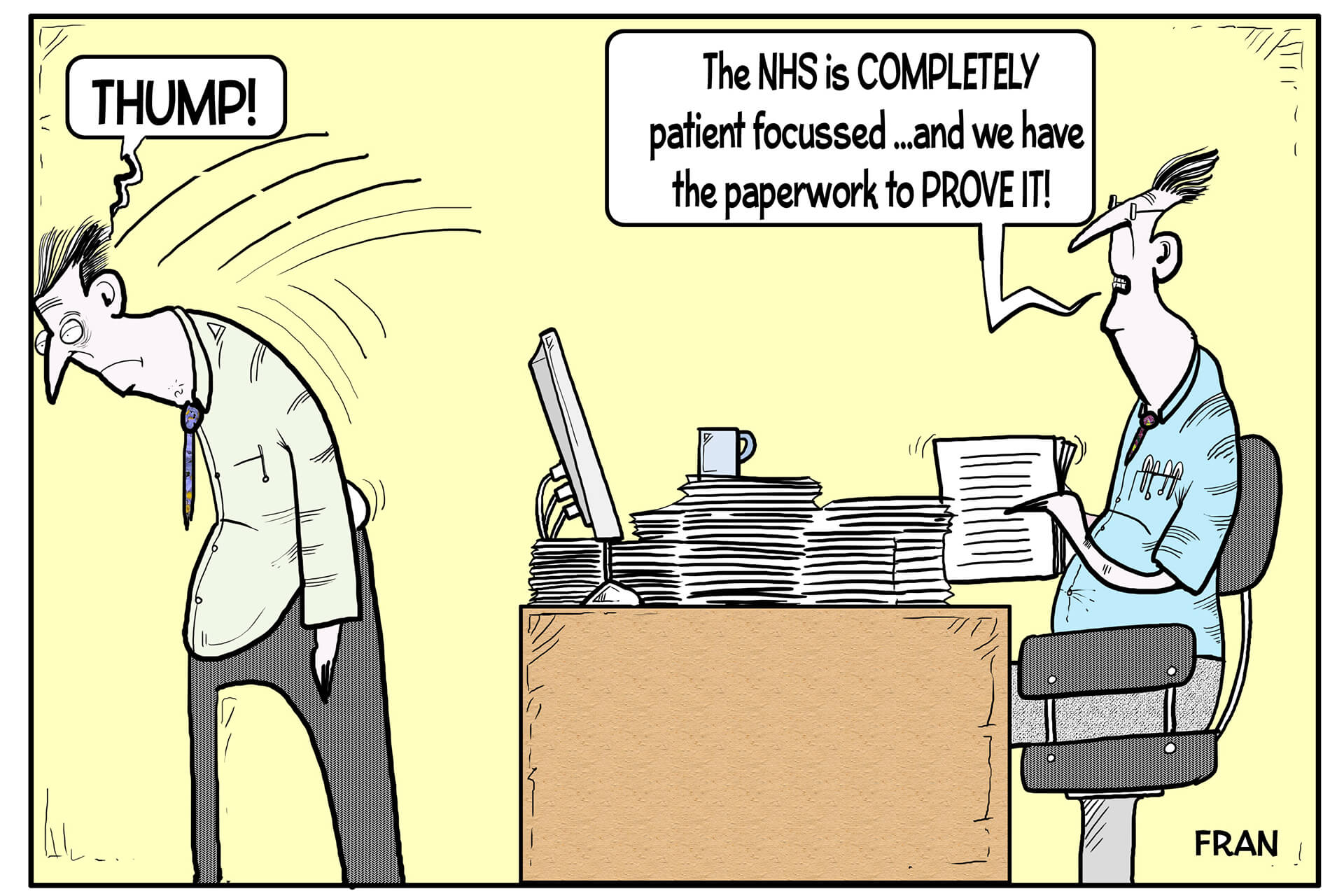 No longer in the hospital support system, you find the NHS runs on paperwork.  Once discharged, you are out of the system,  No-one has ownership of your problem – you have a long process to get treatment.

Now you have to ask your GP when you need treatment

I can’t remember which Minister of Health decided once  hospital ended, it would be more cost-effective to hand over your care to your GP.  GPs objected strongly, saying they were not cancer specialists – but the Minister didn’t listen.  What a surprise!

My GP is honest, and tells me “I know little about cancer”and will often ask whom I want to see. Others say they  might be told “see if this works and come back if it doesn’t”. This wastes more time as GP then probably says you must see a consultant, and today you can wait months for an appointment.  If you could have just gone back to your original hospital, they could have told you immediately whom you should see : quicker, more convenient for you, and you don’t waste GP’s time.

What you can do

Learn to work the system.  To get a faster appointment stress to your GP you need an URGENT referral for cancer, and make certain they MARK this on the referral.

Meanwhile, Verywell, the US medical website, has come up with a list of major long-term side effects that might give pointers to what’s making you feel queasy. And help you realise you are not alone, when your GP admits “I’ve never come across this”.  Why should they?

You defnitely are not alone

It used to be said by CRUK, Macmillan etc. that one in four of us would have long term side effects from cancer treatment.  Now latest figures say more than half of cancer survivors report problems. These may arise months, years, and even decades after treatment, but can significantly lower quality of life for survivors.

The following conditions are some long term side effects, and a website address with more information.  Don’t forget, there is lots out there – it’s just a question of Googling reliable websites:  :

While depression is no more common among cancer survivors than those who have not experienced cancer, anxiety is a significant problem. One study looking at almost 50,000 cancer survivors found that 18 percent of them suffered from anxiety after treatment was completed. This anxiety did not appear to decrease with time, and, in fact, those who were 10 or more years out from treatment had an especially high rate of anxiety. Fear of cancer recurrence is one form of anxiety that is a concern that most, if not all cancer survivors experience from time to time.

That’s why it was so helpful to have a Nurse at ‘your’ hospital whom you could phone for a chat.  GPs don’t have time or knowledge to do this – so if you have a Nurse’s phone number or email, treasure this!

Incidentlly, in Europe you are often given massage to help you cope with anxiety, and certainly if you can afford this, it is worthwhile.  Look for therapists with special oncology training https://aftercancers.com/is-massage-ok-for-cancer-survivors/

Chemobrain – cognitive challenges following chemotherapy – has received attention in recent years. Symptoms such as difficulty multi-tasking and difficulty concentrating may begin during chemotherapy and persist for months or years. Radiation therapy to the head and neck regions for head and neck cancers, brain tumours, brain metastases and prophylactic cranial irradiation (PCI) (used for some people with lung cancer) can also contribute to these symptoms.

For some people, trying to focus on one task at a time, keeping lists to compensate for memory gaps, and doing “brain exercises” such as sudoku may be helpful. For others, consulting with a neurologist or psychologist may be recommended when symptoms are interfering with daily life.  Don’t get frustrated – just realise it happens to many of us.

Skin is our biggest organ and cancer survivors often experience xerosis (Dry skin) or pruritus (itchy skin). These side effects may be more common for people with cancers of the blood, such as leukemia, lymphoma, and multiple myeloma.
Dry and itchy skin often breaks out long after chemotherapy and hormone therapy –  sometimes years later and can happen frequently.  This also happens after targeted therapy, radiation therapy, and bone marrow transplants.
Antibiotic treatment also produces skin problems.  The NHS is not very good at treating this, but remember skin is our largest organ, so look after it.
More info:  https://aftercancers.com/category/beauty-skin/
Fatigue

Cancer fatigue is an all-too-common symptom affecting the majority of cancer survivors. In addition to the quality of life issues, fatigue may be a risk factor for lower survival.

Cancer fatigue is difficult to understand if you haven’t experienced it yourself; it’s not the kind of tiredness that can be relieved with a good night’s rest or a cup of coffee. Tension with loved ones may develop as your friends and family expect you to return to your pre-cancer self after treatment. If you are finding this frustrating, you aren’t alone. Check out these tips for coping with cancer-related fatigue, and, better yet, print the article and hand it to family and friends who “just don’t get it.”

There are some causes of fatigue caused by cancer treatments that may be treatable. One example is long-standing anaemia following chemo or hormone thrapy. Another example is hormonal changes. Radiation therapy to the head and neck can result in low thyroid hormone levels (hypothyroidism) which can cause or contribute to fatigue in addition to causing other symptoms. In contrast to hypothyroidism, chemotherapy may also result in hyperthyroidism (an overactive thyroid) which may cause weight loss, a tremor, and anxiety that can be severe.

There are many other causes of fatigue following cancer treatment, some that are treatable, others that are not, but your doctor will only know to order necessary tests if you speak up.

Heart disease is a leading cause of illness and death among cancer survivors. Some of the most common causes include:

In my non-PC way, I reckon most GPs aged over 50

Your GP knows you, so is probably best person to help you

Insomnia is common among cancer survivors and often persists for years beyond treatment. While this symptom may sound trivial to some, chronic insomnia not only reduces the quality of life but raises the risk of further physical and psychological problems. Research has found that cognitive behavioral therapy for insomnia (CBTI) can significantly improve this symptom for many people with cancer.

Many chemotherapy and hormonal treatments can lead to bone loss. This, in turn, can lead to fractures. It’s important to talk to your doctor about measuring your bone density, as well as checking your vitamin D level,.  Vitamin D deficiency can lead to osteoporosis as well as other conditions. Better still, get your GP to refer you to a top Rheumatologist who specialises in this area.

Peripheral neuropathy—damage to nerves leading to the arms and legs that are often permanent—is a very frustrating late effect of cancer treatment. US hospitals acknowledge this condition affects roughly a third of people with cancer;  here, the penny is just starting to drop with the NHS;  it has resisted acknowledging it (money) so you have to fight to get treatment.

Symptoms may include numbness, tingling, “pins and needles” pains, and cold intolerance. Decreased sensation in the hands and feet can interfere with simple activities such as buttoning clothes, or difficulty placing your feet, resulting in falls. Many chemotherapy medications can cause neuropathy, but most commonly occurs with drugs such as Platinol (cisplatin) and Taxol (paclitaxel).

Post-traumatic stress disorder in cancer patients is another condition which has recently received more attention among cancer survivors. This condition, which is better known as occurring among those who have been exposed to war, or rape victims, for example, is thought to be present in as many as 35 percent of patients following treatment. The treatment for PTSD can involve several modalities, but the most important step is in recognizing this oft underdiagnosed condition in the first place.

Reading through this makes me realise just what we take on board. Cancer treatments can affect nearly any region or organ system in the body. Lymphoedema, kidney damage, pulmonary fibrosis, tooth decay, hearing loss, and cataracts, etc.  are more common among those who have survived cancer than among the general population.

The NHS ‘says’ we will all get help – but in reality we have to drive this ourselves.  If we don’t ask, we don’t get.