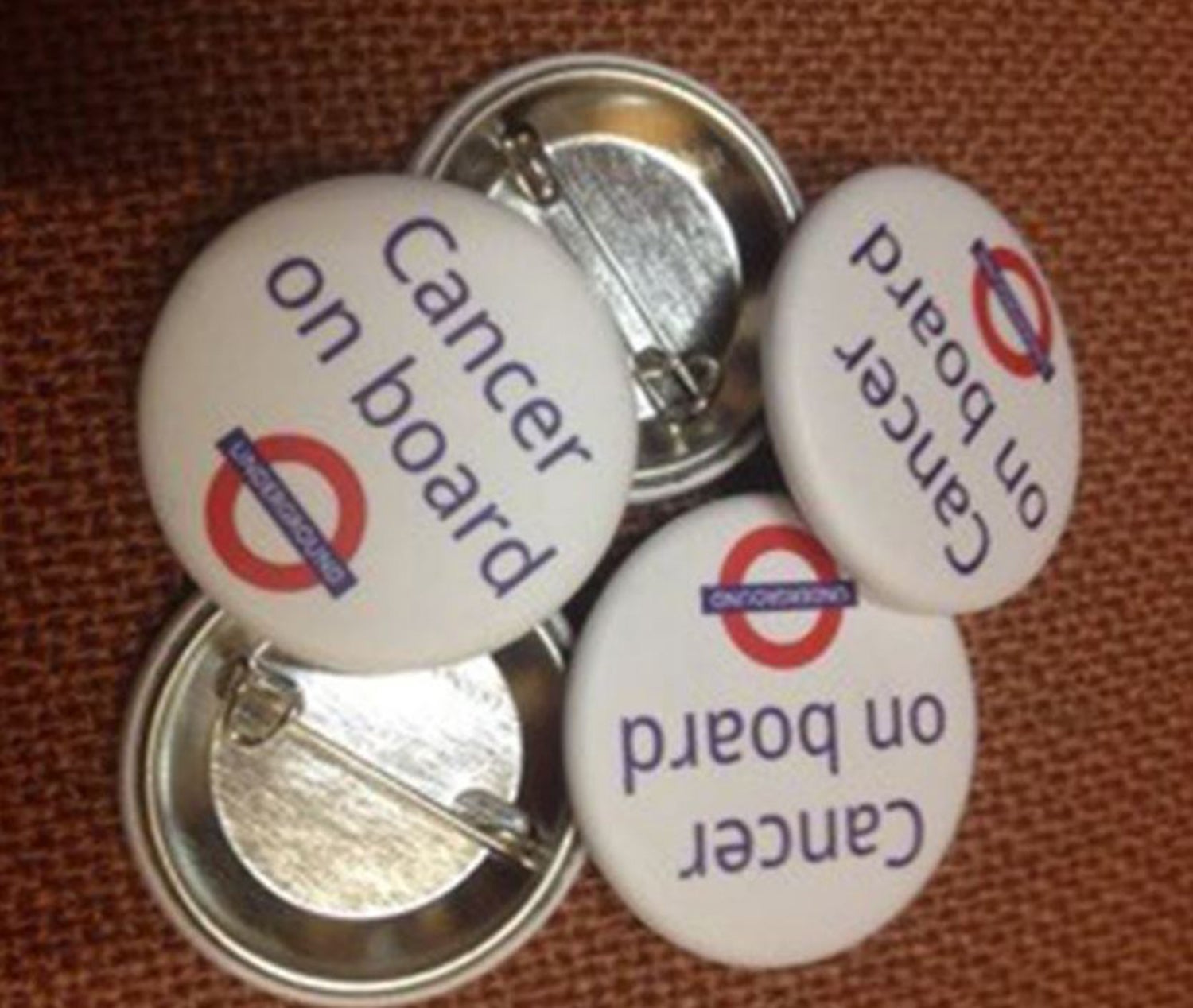 to help people like him get a seat on busy Tube services. – And also buses one supposes

One evening I climbed on a bus at Aldgate. As I made my way to the Priority seats, I noticed it was full of men.  I must have looked OK, as those sitting on these seats refused to get up.  I was left clinging to seat backs as we lurched along, and could really have done with a similar badge to those in the photo..

These badges are the bright idea of cancer patient James McNaught.  For three months, James  used the London Underground to get from his home in Kentish Town to University College Hospital, after he was diagnosed with throat cancer.  He often struggled to find a seat;  he was not visibly disabled but couldn’t speak because of his treatment.

Then he had an idea;  and got Transport for London interested in “Cancer on board” badges for patients when they ride the network.  Now, hopefully these will make it easier for us to find a seat.

There has been a lot of media interest, and James told the Standard: “I couldn’t talk as I had radiotherapy in my throat. There was no way I could make myself understood short of writing notes. I had to travel feeling like that and the heroic amounts of morphine I was prescribed made me appear drunk”.

Travelling on the Tube, he said he got the feeling people were thinking he was a junkie. “It was embarrassing and I just huddled up in the corner and hoped no one was looking at me too much.”

So he had the idea for the badges, to alert fellow travellers to the problem, and he has left badges in hospital waiting rooms for other cancer patients to try out.  So if you have problems when travelling, have a look round in case there are any badges in Outpatients.

A TfL spokesman said: “We understand asking for a seat on the Tube can sometimes be difficult, which is why we produce products such as our baby on board badge so passengers in priority seats know when they should give them up.

“We are also aware that some of our customers may have a hidden condition, which requires them to be seated, and we are currently looking at every available option to help improve their journey. We will be looking to discuss Mr McNaught’s idea further with him.”

Such a simple idea – let’s hope it catches on!