The Lady with the Lamp

Exhibition on the woman behind the myth

To many, when we think of Florence Nightingale we think of the woman who walked the wards of the Crimean military hospital, holding up a lamp to light her way as she tended sick and wounded soldiers.

Opening on March 8th, a new exhibition shows the world the bigger picture, bringing out the true story of this remarkable, iconic social reformer.  Known as ‘the Founder of Modern Nursing’, and revered by Nurses across the world, she is almost deified in the United States. When our family was invited to the Graduation Ceremony for Turkish Nurses held in  Scutari, Istanbul, every graduate nurse walked up on stage proudly carrying a lamp in her memory, to receive their Diploma.

An exhibition at St. Thomas’ Hospital, where she did so much to reform nursing care, opens in the Nightingale Museum in March;  the entrance is opposite the Transport Lounge, so if you are twiddling thumbs waiting for a lift home, why not pop over and spend a fascinating hour.

Florence became famous when she re-organised soldiers’ healthcare in the Crimea, but it was when she returned to London, broken in health and disabled enough to spend much of the rest of her life in bed, that she set about using her formidable energy, talents and high-up contacts to reform nursing and hospitals.  Reforms which were copied around the world, and helped transform healthcare.

Scutari Hospital – where she set up her hospital

Standing high on top of a hill on the Asian side of Istanbul’s Bosphorus Straight, this building hasn’t altered much from what you see in this old Almaly photo.

As a teenager, Daddy was stationed in Istanbul, where the old Scutari hospital building (used to house the shiploads of wounded bought in from the Crimea), still looms over the Bosphorous, two miles across the sea from our balcony, overlooking the straights.   It’s more built-up now than is show in this Alamy photo, but it is still a massive buiding, which today is still used by the Army. In Florence’s day it had room for thousands of soldiers transported here from the Crimean battlefields.

What was it all about?

In October 1853 the Turkish Ottoman Empire had declared war on Russia, following a series of disputes over holy places in Jerusalem and Russian demands to exercise protection over the Orthodox subjects of the Ottoman sultan. The British and the French, allies of Turkey, sought to curb Russian expansion. The majority of the Crimean War was fought on the Crimean Peninsula in Russia. However, the British troop base and hospitals for the care of the sick and wounded soldiers were primarily established in Scutari (known as Üsküdar), across the Bosporus from Constantinople (Istanbul).

The appalling condition of the wounded here was reported to the London Times by the first modern war correspondent, British journalist William Howard Russell. Reports stated that soldiers were treated by an incompetent and ineffective medical establishment, and that the most basic supplies were not available for care. The British public raised an outcry over the treatment of the soldiers and demanded that the situation be drastically improved.

Sidney Herbert, secretary of state at war for the British government, wrote to Nightingale requesting that she lead a group of nurses to Scutari. At the same time, Nightingale wrote to her friend Liz Herbert, Sidney’s wife, asking that she be allowed to lead a private expedition. Their letters crossed in the mail, and in the end their mutual requests were granted.

Nightingale leading an officially sanctioned party of 38 women, arrived in Scutari at the Barrack Hospital on November 5. Not welcomed by the medical officers, Nightingale found conditions filthy, supplies inadequate, staff uncooperative, and overcrowding severe. Few nurses had access to the cholera wards, and Nightingale, who wanted to gain the confidence of army surgeons by waiting for official military orders for assistance, kept her party from the wards. Five days after Nightingale’s arrival in Scutari, injured soldiers from the Battle of Balaklava and the Battle of Inkerman arrived and overwhelmed the facility. Nightingale said it was the “Kingdom of Hell.”

In order to care for the soldiers properly, it was necessary that adequate supplies be obtained. Nightingale bought equipment with funds provided by the London Times and enlisted soldiers’ wives to assist with the laundry. The wards were cleaned and basic care was provided by the nurses. Most important, Nightingale established standards of care, requiring such basic necessities as bathing, clean clothing and dressings, and adequate food. Attention was given to psychological needs through

assistance in writing letters to relatives and through providing educational and recreational activities.

Nightingale herself wandered the wards at night, providing support to the patients; this earned her the title of “Lady with the Lamp.”  Gaining the respect of soldiers and medical establishment alike, her accomplishments in providing care and reportedly reducing the mortality rate to about 2 percent brought her fame in England through the press and the soldiers’ letters. 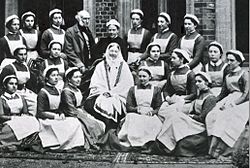 She gave nursing a favourable reputation, in the days when it was seen as being a profession for fallen women, prostitutes, etc. Because of her work in the Crimea she became an icon of Victorian culture.

By 1860, she had laid the foundation of professional nursing as we know it today with the establishment of her nursing school at St Thomas’ Hospital in London. It was the first secular nursing school in the world, and is now part of King’s College London.  She believed in cleanlness, set her nurses to scrub the wards so that infection couldn’t take hold, and scrubbing  hands is still paramount.  She designed ‘Nightingale Wards’ with large windows to bring in fresh air, a nursing station where Sister could see everything going on in ‘her’ ward, and she considered the optimum number of beds a good team could look after was 24.  If you go to St. Thomas’ today you can still see how these wards were built.

In recognition of her pioneering work in nursing, the Nightingale Pledge taken by new nurses, and the Florence Nightingale Medal, the highest international distinction a nurse can achieve, were named in her honour, and the annual International Nurses Day is celebrated on her birthday. Her social reforms included improving healthcare for all sections of British society, advocating better hunger relief in India, helping to abolish prostitution laws that were harsh for women, and expanding the acceptable forms of female participation in the workforce.

Nightingale was a prodigious and versatile writer. In her lifetime, much of her published work was concerned with spreading medical knowledge. Some of her tracts were written in simple English so that they could easily be understood by those with poor literacy skills. She was also a pioneer in data visualization with the use of infographics, effectively using graphical presentations of statistical data.[6] Much of her writing, including her extensive work on religion and mysticism, has only been published posthumously.

In this video there is a print of her with her pet owl, which she rescued and kept in her pocket when it wasn’t sitting perched by her bedside.