The NHS in today’s Broken Britain

Getting back to normal – let’s keep ‘new’ NHS care 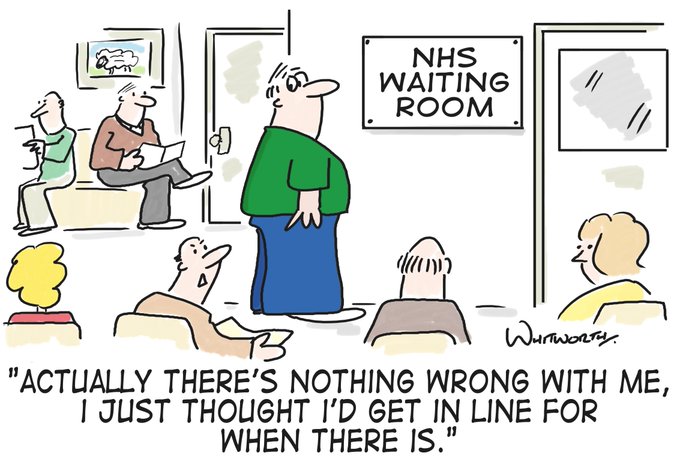 After Sajid Javid’s laest “Rally the Troops” speech to the NHS, I MUST remember to re-double my efforts to tell those still working in the NHS I REALLY, REALLY APPRECIATE YOU!

During lockdown, many of us discovered NHS staff stepped up to give a superb, more personalised service.  e.g. Instead of a letter offering me an appointment six months later, several times I was phoned by a Consultant’s secretary, saying my appointment was scheduled for the next week.

But, when congratulating one of my doctors, he told me “I knew the covid crisis was over when the ~administrators started to return to work”, and he no longer was able to take charge of his appoitments.  Sad.

As a nation, it’s known that we don’t pay enough for our medical care.  So if we aren’t going to spend enough to give us comparable medical care compared to other European countries, we’ll just have to learn to live with what we’ve got.

Luckily for us, we have incredible NHS staff looking after us.  From the days of Florence Nightingale, there were men and women prepared to go the extra mile to look after us – in fact you can even go back, to medieval times, or further, to find how bodies such as the Knights of St. John organised exemplary care.

During Covid, our NHS workforce stepped up and produced innovative, timely and superb care.   No one knew how things would work out, but surprisingly there were many new initiatives that came to the fore, and worked.

I couldn’t see how these would work – but often they did.  What worked for me was

1. Instead of having to go to the surgery to discuss with the GP arranging a referral to a consultant, now I send an email, GP phones me back, I explain what I need and a referral is made – takes less than 10 mins.

2.  Hospital transport .  I bless the fact that this is available as I am disabled. At the beginning of the pandemic, our local ambulance service hired in London taxis, which were superb:  their suspension glides along, so one no longer rattled and bumped along,  b) they have retractable ramps which were easy to walk up  c) they have swivel seats which are  ideal if you have a fractured hip etc. They’ve gone back to London, but let’s have them back!

3.  instead of waiting – and waiting – for the anonymous Call Centre to arrange appointments, now I was phoned by the Consultant’s secretary, who took an interest, and several times phoned me to say that an earlier anointment had come uo.  In some areas (my lips are sealed!) this is still happening, and today I was phoned by a Secretary for a follow-up appointment – never would have happened before they got the bit between their teeth.  Instead I would have waited for the Appointments Call Centre who would have delayed my follow-up for as long as they could.

4.  Suddenly, we no longer were at the mercy of an anonymous appointments call centre.  Instead consultants were able to prioritise whom they were going to see urgently, and I certainly benefited from this ‘new’ regime.

Hygiene  It took a Pandemic to remind staff that equipment we were going to touch should be wiped down in between each patient ( I used to take antiseptic wipes in to consulting rooms, gyms etc. to wipe down ophthalmic equipment, etc.)

And as for “wash your hands” I used to despair in the Ladies’ loos, watching others dash in, use a cubicle and dash out, without washing their hands.  Ugh.

So thank you to all the Secretaries, Receptionists, etc. who came forward and helped us :  Lisa, Nicola,

Imogen, Emma, Valentina, Nashmi, etc. etc.  You are real heroes, and long may you stay in charge!