Will someone please reign in Bojo

Is the Prime Minister a Bull in the China Shop? 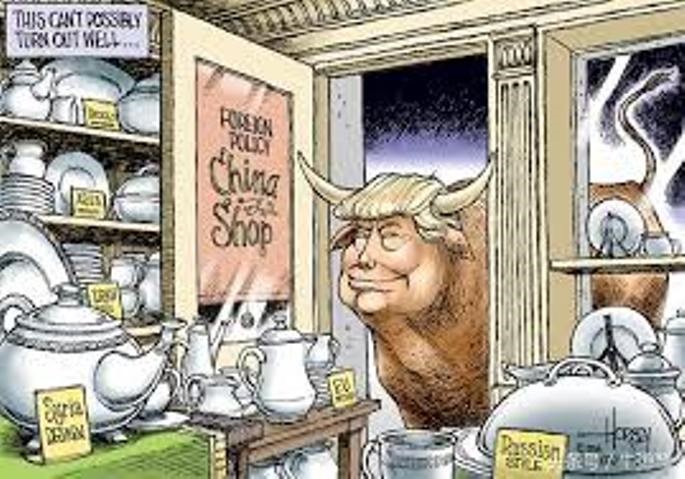 Watching Boris on TV reminds me of the proverbial bull, out of his depth but causing havoc.
Hair, eyes and hands flailing around,  Bojo is in full spoilt brat mode, as he announces massive Government expenditure to ‘Build, Build, Build’ our way out of crisis.
Forget about the fact that the country is bankrupt, he panders to the big boys in building and construction, who, according to the Daily Mail, bankrolled the Conservative Party.to the tune of £11 million recently.
Limerick for lockdown
One of the delights in our village during lockdown was Limericks being posted on major trees (a tradition here).  I thought this one appropriate
For this I make no apology
Our leaders are not what they ought to be.
They blag all the time
About taxes and crime
But they’re stumped on epidemiology

Before the Government throws away any more of our hard-earned dosh to “Build – Build – Build”, let’s see patients, hospital staff and estates managers sitting down together to plan what is really necessary for the NHS.  During lockdown there have been so many patient-friendly innovations they could build on, that not only save money, but make treatment easier for patients.

Matt Hancock and Adminstrators should stop Empire building, and take a long, hard look at the way middle-ranking NHS staff got on with organising effective and patient-friendly care.  It was a delight to find that the people who knew what was needed were minding the shop, and often doing a much better job than their bosses.

In fact I can think of several NHS CEOs (particularly one whose skirts get shorter the higher she climbs the NHS ladder), who wouldn’t be missed, but are too arrogant in their Empire building to see what patients really need.

As NHS guru Roy Lilley says, “local communities (must be) given the opportunity to plan, design, respond, control and organise their own response”.  Not some faceless bureacrat with no idea what is needed on the front-line, and wouldn’t know what a patient looked like – or even what they needed.

Let’s call a halt
Apart from essential work on roads and NHS, surely now is the time to take a deep breath, look at how life has changed during lockdown and decide if and where we are going to need new building developments.
It could be that with many people now happy to work from home, needs are changing.  During lockdown the Green Belt came into its own; surely this should continue to be protected for our recreational use and mental health, rather than released to build ‘Executive homes’?  These homes line the pockets of developers, but cause havoc with over-crowding in local schools, GP surgeries, on roads, etc. .
The Government should think long and hard look and

Once these points have been taken into consideration, could town planners be looking at a very different picture?   It will take time to gather all the information needed, but don’t let out-of-control bulls damage our fragile economy until WE have told planners what WE need.

If this means Party donors will just have to shut up, and get on with their day job – well, the Prime Minister is there to lead – not into more expensive planning ‘visions for the future’, but in to what people want.

Learn from mistakes
‘They’ saw the Corona spike coming in Leicester, but dithered about what was needed.  Leicester’s Mayor was speaking sense, but now seems to have been silenced – “Ve haf vays of keeping you quiet” springs to mind.
Now that Whitehall’s know-it-all control freaks have been hit with a corona spike in Leicester. surely we should learn from what’s happening there, and prevent it happening elsewhere?  Why aren’t the Police given powers to close down areas that are unsafe?
And it would be an excellent idea if someone got a grip on the trouble caused by drunks in A & E.  Currently, Ambulance

crews say it was a big improvement when they didn’t have to deal with.drunks.
Let’s copy other countries where  the police sling a drunk into a holding pen (Belgian Police look at me askance when I say we can’t treat them roughly – “but they are causing trouble” they tell me).  An efficient no-nonsense nurse will fish in their pockets, take their credit card details, then leave them in a locked-up room to sober up.
Next morning, they realise they are going to be charged for wasting hospital time.  But the thought is, if they can spend a lot of money getting drunk, they can pay for hospital time to look after them.
Unite says “NHS ambulance and A&E staff are braced ‘with a great deal of trepidation’  for the fall-out from the mass opening of pubs …If that happens, Unite blames the ‘gung-ho and mixed messaging’ from prime minister Boris Johnson for putting too much emphasis on the easing of the lockdown and not sufficient weight on the need to still follow the social distancing rules.”
So while we still have relatively-traffic free roads, fewer commuters, firms willing to home deliver goods and a population that has formed new working habits, let’s look at what was good about lockdown, and build on it.
Boris, please don’t go crashing around the shop and restoring the bad old ways.  Forget setting up daily US-style Press Briefings –  I’ll bet the average Brit would rather you were in Downing Street, behind your desk, than giving out platitudes daily at a press conference.  Your ‘Talking Heads’ weren’t much cop – heaven forbid we have to pay for a special set up so that you can pontificate in front of us every day.  I won’t be watching.  Wonder how many will?